Skip to content
Home > Natural Blood thinner > Is coconut oil good for you? 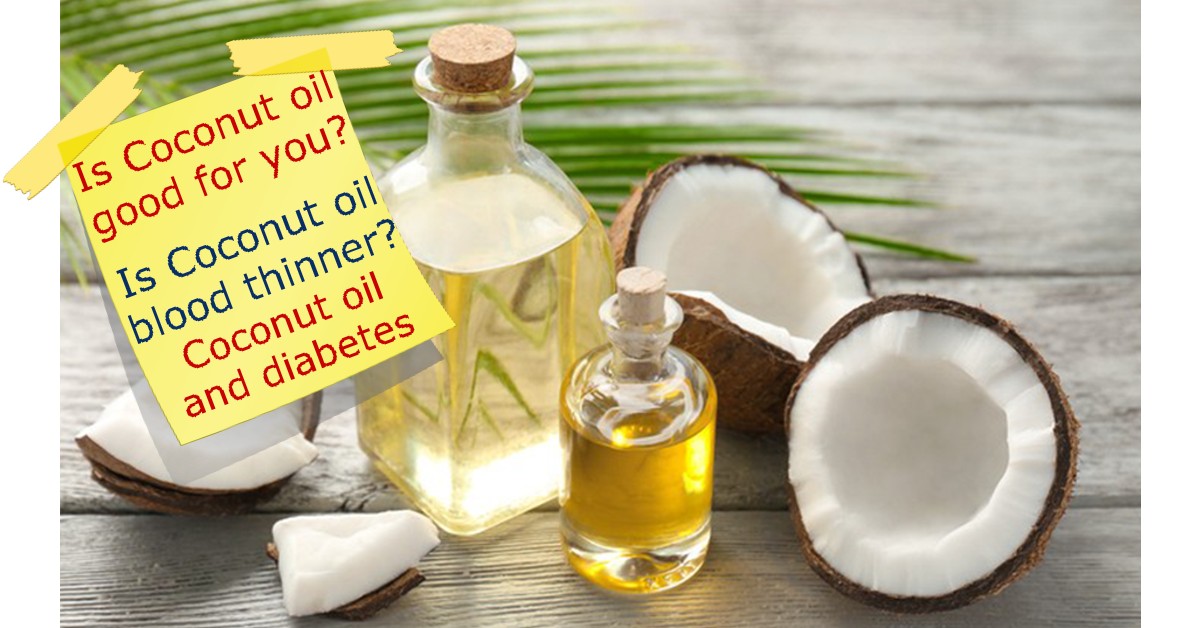 Is coconut oil good for you?

Coconut oil is all the rage these days. From using it in food to moisturising your skin and to rescue hair from split ends. Although you can get coconut oil on every shelf in every shop, you need to understand the science behind coconut oil. You need to familiarize yourself with both the good and the bad of coconut oil. Once you have that information, then you can make an informed decision about what you put in your body.

Is coconut oil a blood thinner?

Although some studies have shown that coconut oil acted as a coagulant, other studies have found that it showed significant antithrombotic effects when compared to other oils. These studies are still very controversial though, as a consensus cannot be reached. Many of the studies are still experimental and unpublished, but does not take away from its findings. One of these studies, performed on rats given cholesterol, showed that after 45 days their oxidation, plasma antioxidants, and vitamins A and E were elevated after ingesting coconut oil daily. This seems to indicate that coconut oil can indeed act as a blood thinner. As with olive oil, it will not have any contra-indications with your normal blood thinning medication.

Hematic food channel also conducted an experiment with a coconut oil. Below you can watch experiment and find out: “Is Coconut oil a blood thinner”. The experiment begun with consumption of Coconut Oil in the morning on an empty stomach. If you are interested how food affecting our body subscribe to hematic food channel.

Coconut oil in the morning on an empty stomach

Coconut oil first thing in the morning is great if you are doing intermittent fasting. It can help reduce your weight as it passes straight to the liver without depositing fat. This then creates a faster metabolic conversion which generates the energy that is immediately used by muscles and organs. Furthermore it will suppress your cravings while still keeping you in ketosis. So if you are on an intermittent fasting diet, a spoonful of coconut oil first thing in the morning will suppress your appetite. For more information, check out the video above.

Here is the flipside of the coin. The pH of coconut oil is 7-8, while healthy skin has a pH of around 5. This can cause breakouts on your skin and worsen other skin conditions. So you have to be very careful when choosing how to use coconut oil. Ingestion is one thing, but external use must also be taken into consideration. If you have a sensitive skin or skin that is prone to acne, then the high comedogenic ratings of coconut oil will not penetrate your pores and will essentially suffocate your skin through clogging. There has been many videos doing the rounds on YouTube and TikTok of how you vigorously rub coconut oil onto your skin to remove excess sebum and blackheads, but this has been disproven. I have tried this myself, and wound up with a hot, irritated face, and no magical swipes of blackheads on tissue paper. Coconut oil has a very high alkalinity, which pushes its pH up to 7-8. This does not mean it is now suddenly bad to ingest. If you look at natural spring water, that has a neutral pH of 7, and is very healthy to drink. So ingestion and external use are two very different things, and should be treated as such.

Where we have already established that coconut oil on an empty stomach holds many health benefits, we are yet to explore what else we can eat or drink with coconut oil. One of the drinks that many people are trying is a tablespoon of coconut oil in a cup of hot black coffee. If you pair the health benefits of coffee with the health benefits of coconut oil, you get quite a potent drink. If you drink this concoction first thing in the morning on an empty stomach, the added benefits of the caffeine in coffee will leave you feeling more alert, improve your mood and brain function, and boost weight loss. If you are interested to find out: is coffee a blood thinner click on the link to watch coffee blood thinner experiment.

Diabetes can be a difficult condition to live with, especially taking into consideration of how careful you have to be of what you eat and drink. So what about coconut oil? If you are a diabetic, can you safely consume coconut oil? Coconut oil is a good substitute for other oils and fats, and is rich in antioxidants while still being low in cholesterol. As far as the relationship between coconut oil and diabetics go, it is a healthy marriage. Since antioxidants play a central role in health, it may prevent and control chronic conditions such as heart disease, obesity, and diabetes. Coconut oil does have different benefits for type 1 and type 2 diabetes, as was shown in a 2016 study done using virgin coconut oil. The study showed that consuming coconut oil enhanced insulin sensitivity, which then supports healthy blood sugar levels. An older study proved that people with type 2 diabetes had lower cholesterol levels and improved glucose tolerance after consuming virgin coconut oil. It is still best to discuss dietary plans with your doctor if you are a diabetic, and to talk to them about the possible health benefits of coconut oil. You can also watch other natural blood thinners experiments by following a link.

Coconut oil is being used more and more in the preparation of food and drinks. Not only is it healthier for you, but it is also a more sustainable and responsible source of food. It is also great for vegetarians, vegans, and people on intermittent fasting or keto diets. But what exactly are the health benefits? As we’ve already established, it is very good for burning fat and shaking off those extra kilos. Some evidence shows that consuming coconut oil may increase how many calories you burn. Coconut oil is also a quick source of energy, and has been used for many years by athletes and body builders. Furthermore coconut oil has antimicrobial and antifungal properties. This is due to its MCT content, but more specifically, the lauric acid that makes up about 50% of the MCTs in coconut oil. Research suggests that lauric acid has antimicrobial effects against disease-causing microorganisms such as staph infection, strep, and e-Coli. Coconut oil has the further health benefit of reducing hunger and keeping your cravings at bay. This is due to the ketones which reduces appetite. Lastly, as a bonus, coconut oil can be used as a mouth wash through a process called oil pulling. This significantly reduces the amount of harmful bacteria in the mouth, and is due to the antibacterial properties of the lauric acid.

There is great debate about whether olive oil is healthier than coconut oil, so it is up to each person to decide for themselves. It is also wise to take into consideration the outcome that you wish to obtain, as well as the health benefits each of these hold. There is no denying that both have a wide array of health benefits, but there will always be controversy around this subject.

If you do decide that you do not want to use coconut oil in your cooking or baking, then there are always a couple of substitutes for coconut oil. Some of these include butter, olive oil, grapeseed oil, sunflower oil, and avocado oil. Butter is great for both baking and cooking, while neutral oils such as grapeseed and sunflower oil is better suited for baking. Olive oil and avocado oil tend to have a stronger taste which does not work well in baking.

How to melt coconut oil

There are a couple of ways that you can melt coconut oil. The quickest way, of course, is in the microwave. You can also melt it in a pot over low heat, or in a bowl over hot water. The question arises whether it is even necessary to melt your coconut oil. For easy use it is always best to melt it, otherwise it will not incorporate into your baking or cooking properly. There is also no reason to worry that you will damage your coconut oil when heating it, as it has a very high resistance to heat. You will also see that if you go to the store to buy coconut oil, it will always be semi solid. You won’t find it in a liquid form as you would with olive oil or grapeseed oil. But because of this it also has a longer shelf life. If it is kept in a cool place it can last from months to years without going rancid.