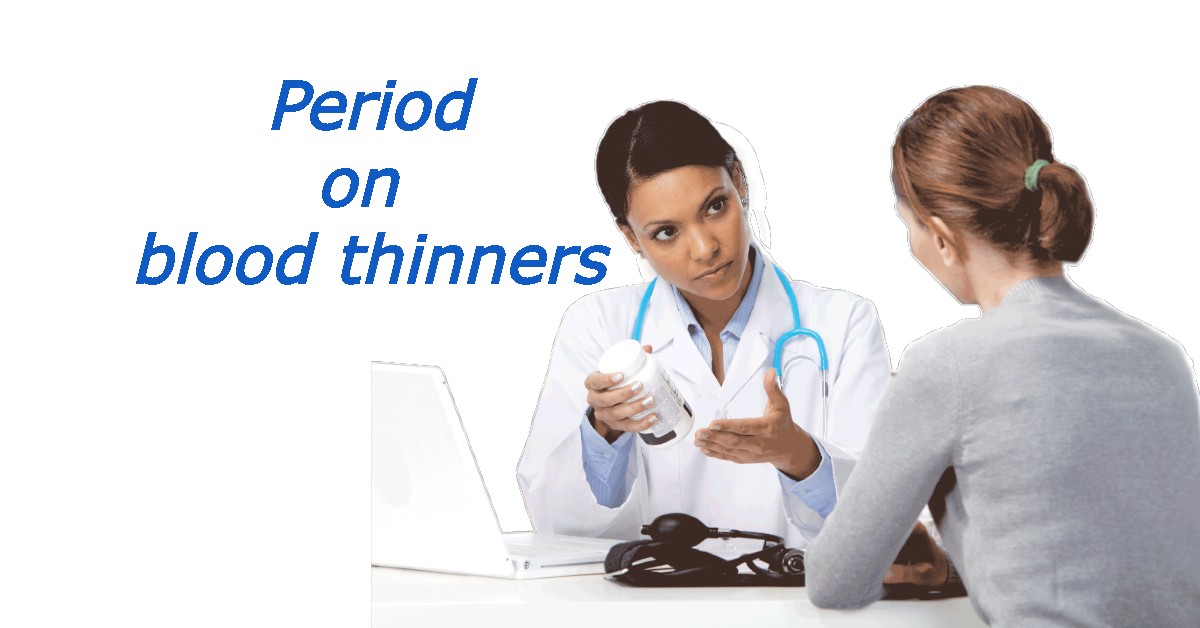 It’s that time of the month again. The bleeding, the cramps, the mood swings, and the craving to comfort eat. But what happens if you are on blood thinners? Does it make having your period more dangerous? Well, not necessarily dangerous, except in certain situations. But we’ll get to that.

While taking blood thinners, it may cause heavy menstrual bleeding. It is not uncommon to have heavy menstrual bleeding if you are on blood thinners such as Warfarin or Xarelto, but it is something that needs to be monitored. Your doctor may prescribe certain medications to counter the effects that the blood thinners have on your menstruation, and may take more drastic steps if you are at risk of thrombosis. Some of these medications include tranexamic acid, high dose progestin-only therapy, or combined hormonal contraceptives.

Other treatments may include a levonorgestrel intrauterine system, or may have to consider surgical options to manage severe bleeding. Women on blood thinners may also experience prolonged periods, which may cause iron deficiency anemia. This will in turn lead to the requirement of iron infusions. Women may also find that they pass much larger and more frequent blood clots during their menstruation, and sometimes heavy menstrual bleeding can cause the need for packed red blood cell transfusions as a result of symptomatic anemia.

Unfortunately there are not enough studies done on the subject, and therefore doctors do not always know how to treat heavy menstrual bleeding in women taking blood thinning medication. This may lead to women rushing to the emergency ward if their menstruation is abnormally heavy and they are losing a lot of blood. Losing so much blood in a short period of time leads to anemia, which then needs to be treated promptly. There are however doctors and scientists making great strides in the research of patients taking blood thinning medication and their resulting menstruation cycle. In most cases it is necessary for direct treatment, especially if the patient cannot discontinue the blood thinning medication.

Another indication of heavy menstrual bleeding whilst on blood thinning medication is intermenstrual bleeding. This is when you bleed outside of your normal menstruation cycle. Through one study it was found that women treated with blood thinning medication had a 71% higher risk of suffering from heavy menstrual bleeding, as well as a significant increase in the duration of menstruation, flooding, and the passing of clots. Another troublesome study found that women treated with Rivaroxaban had a much higher incident of mucosal bleeding, especially uterine and ovarian bleeding.

Is it the medication?

Some of the indications of a sudden change in your menstrual cycle needs to be documented, such as the need to change your sanitary pad or tampon more than once per hour, and clots that measure larger than 25mm. You do however need to inform your doctor if you have a history of heavy menstrual bleeding, as this may be an indication of an existing bleeding disorder. When you do report an increase in bleeding, you will be assessed for bleeding severity, the consequences of such, as well as the impact it has on your quality of life. The doctor will possibly run other tests such as a complete blood count, serum ferritin, serum creatinine, as well as a pregnancy test.

If you have a history of heavy menstrual bleeding, there may be a myriad of other causes. One such cause is that you may be suffering from the Von Willebrand disease, which is hereditary. It is one of the most common causes for heavy menstrual bleeding, which is why family history is very important. Other causes may be side effects from other medications that you are taking.

Another cause may be a thyroid problem. If your thyroid is not functioning properly, this may affect your menstrual cycle. A rarer cause is hyperprolactinemia, which is the hormone prolactin from the brain that controls your menstrual cycles. This, however, can be brought on by stress, either mental or physical, as it affects your hormone levels. There is, of course, the one cause that not many people likes to talk about. Being overweight or obese has a direct link to heavy menstrual bleeding. This is caused by the hormones made in fat, which directly affects the uterus.

Me and my uterus

Each month the tissue inside of the uterus builds up in preparation of a pregnancy. If an egg is not fertilised, the lining sheds, and we experience this shedding of the lining as a period. Therefore problems with the uterus is a common cause for heavy menstrual bleeding. One of the first culprits are polyps, or fibroids. These benign growths in the uterus prevents effective contractions of the uterus, which may result in heavy menstrual bleeding. So those cramps you feel do have a purpose.

Endometriosis is another big culprit, as this is when the lining of the uterus is either inflamed or infected. Therefore the normal process of monthly shedding does not work as it should, and leads to extremely painful and heavy menstrual bleeding. A scary one is cancer or pre-cancer of the uterus or the cervix. Due to rapid growth, the abnormal tissue growing in the uterus or cervix may cause abnormal and very heavy bleeding. Finally we look at complications of pregnancy. A miscarriage or ectopic pregnancy may cause heavy bleeding. This can easily be mistaken for menstrual bleeding outside of the cycle, and should therefore be brought to the attention of your doctor.

Be aware of your normal period

Being aware of what is normal during your menstrual cycle is very important. That way you can quickly pick up on anything that is out of the norm. If your period lasts longer than seven days, if you have to change your pad or tampon more than once every two hours, if your pad or tampon is completely saturated with blood, if you have blood clots larger than 25mm, if you feel drained of energy, if you are pale, and if you are easily short of breath, then these may be indicators that you are suffering of heavy menstrual bleeding. This is also the time to go to your doctor for a check-up. This is also the time to call your female relatives to get a full medical history, and to make a list of all the medication you are currently taking. This includes blood thinners, as it may be an important indication for your doctor to consider.

Should I stop taking my medication?

With a resounding echo, the answer is no. There is a very good reason that your doctor put you on blood thinning medication in the first place, and simply stopping this medication may have much more serious complications than having to deal with heavy menstrual bleeding.

Your doctor will talk you through the different options of how to handle the situation, which may include tweaking the medication you are on, or putting you on certain therapies or transfusions. If you are unsure of whether you are truly suffering from heavy menstrual bleeding, then you can find standardised questionnaires to guide you, and then take this questionnaire to your doctor. This will help them understand your bleeding better, and help them to treat you more efficiently. But under no circumstances should you ever stop your blood thinning medication without consulting your doctor first. If you do so, then heavy menstrual bleeding may become the least of your problems.