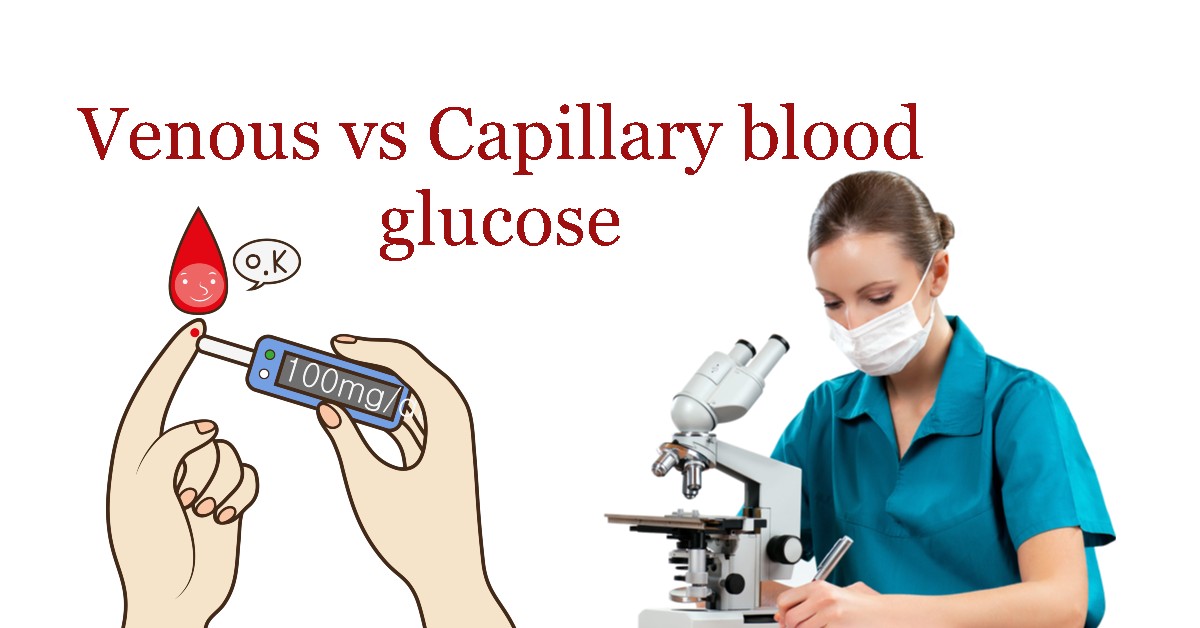 When we were at school, we briefly learned about capillaries, veins, and arteries. The three major blood vessel types. It is only when you go to medical school that you learn more about these blood vessels. Unless you are a diabetic. Then you quickly become accustomed to the terms used when the doctor needs to check your blood glucose. This is mostly done via the capillary vessel with a glucometer. But let’s take a closer look at capillary blood glucose.

The conclusion that they drew from this was that although the venous blood glucose and the capillary blood glucose levels had a marginal difference, they had to take into consideration the constant fluctuation of blood glucose levels. Thus came about the early intravenous cannula insertion. With this it enabled hospital staff to readily have available blood glucose testing, thus removing the need of constant finger prick samples.

Why do you wipe the first drop of blood?

The use of alcohol swabbing on capillary blood glucose measurements are a standard for both private doctors as well as hospital doctors and hospital staff. This is especially true when an emergency patient comes in, where there is no time to set up a venous blood glucose measuring kit. This requires a simple swab and prick situation.

The reasoning behind swabbing the fingertip with an alcohol swab on capillary blood glucose measurements is quite simple; the sample may be altered by whatever is present on the fingertip. But still the controversy remains. Many do believe that the alcohol of the swab alters the results of the sample, while others argue that many patients cannot produce a second drop of blood. Since capillary blood glucose levels is extremely important to monitor critical patient care decisions, many has decided to forego the swabbing away of the first drop, and simply use it as the sample for the strip. The danger does remain that inaccurate capillary blood glucose values may lead to dangerous episodes of hyperglycaemia or hypoglycaemia.

For outpatients, the use of alcohol swabbing preparation pads are normally not used. They are simply instructed to thoroughly wash their hands before performing a capillary blood glucose values test. This is why it is so important for outpatients to keep an accurate account of their results, as this may indicate extreme differences in capillary blood glucose values if they are hospitalized.

In the same study, a group of 192 volunteers consented to two capillary blood glucose tests. All the participants were asked to thoroughly wash their hands. Thereafter one capillary blood glucose level was taken without further prepping of the finger, while the other finger was swabbed with an alcohol prep pad. The samples were taken within 2 minutes of each other. Their findings showed that the fingers prepped with an alcohol swab yielded results of 10.44 mg/dL lower than the fingers that were not prepped. This would ring bells as being clinically significant.

In another study done by the same team, 526 patients with type 1 and type 2 diabetes were selected for the study. They took capillary blood glucose sampling where the finger was prepped with an alcohol swab and dried before piercing the skin, then they took a sample where the second drop was taken, and finally they took a venous blood sample to be analysed in the laboratory. Of the three, they found no statistically significant differences in blood glucose readings. They concluded that the fact that the alcohol was allowed to dry before piercing the skin is what made a difference. Unfortunately this is not common practice amongst nursing practice. For more information on this study, please follow the link The Effect of Alcohol Prep Pads and Blood Drop Number On Capillary Blood Glucose Values (unh.edu)

What puts me at risk?

There are a couple of factors to look out for that would make you a high-risk for developing diabetes. Some of these include individuals who are overweight or obese, people over the age of 45, individuals with high blood pressure, and people of certain ethnicities. But diabetes is not a death sentence if properly managed. You can still live a full, active life.

In Hollywood there are stars such as Tom Hanks, Salma Hayek, Nick Jonas, and Randy Jackson who lives with diabetes as a constant companion. In the sports world we have stars such as Jay Cutler (former football quarterback for multiple teams), Bill Carlson (Ironman triathlete), Pamela Fernandes (Olympic gold medal cyclist), Billie Jean King (tennis legend), and Mark Lyle (professional golfer), just to name a few.

Knowing that exercise affects blood glucose, it is good to know that these people are able to live a full life with this disease. It is not a death sentence if properly monitored, and that is why the glucometer is so important, and why a journal of your capillary blood glucose readings will help you to reach your full potential, in spite of having diabetes.